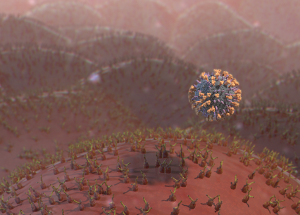 3D graphics is everywhere nowadays. Movies, advertising, science & technology, education, you name an area and 3D graphics are used. With endless applications, it is not only fun to use but it opens many more possibilities to make much more informative and appealing graphics than by traditional means.

Making a 3D Graphics production involves many different aspects and stages, and it can be intimidating to try to learn everything. This complexity is why people usually specialize in a specific computer graphics area, such as only modeling or animation. However, it is important that even if you only model, you need to know at least animation basics, to produce objects that an animator could readily use.

This course will cover all the major steps and aspects in creating 3D graphics: Modeling, animation, shading and rendering. That is why this course is useful not only for complete beginners, trying to get into the world of 3D, but also for users who want to be more efficient in their team and better understand the various requests of others with different specialities.

The concepts learned in the course will be applied using Autodesk's Softimage, a very flexible software that can be used for all the steps needed to create 3D animations. By using only one tool we avoid learning a different interface for each topic. However, the knowledge that you will acquire here can be directly used in any other package.

Target Group:
This course is suitable for complete beginners, using an introduction into 3D.

The fees for this 3d-Animations course per day: